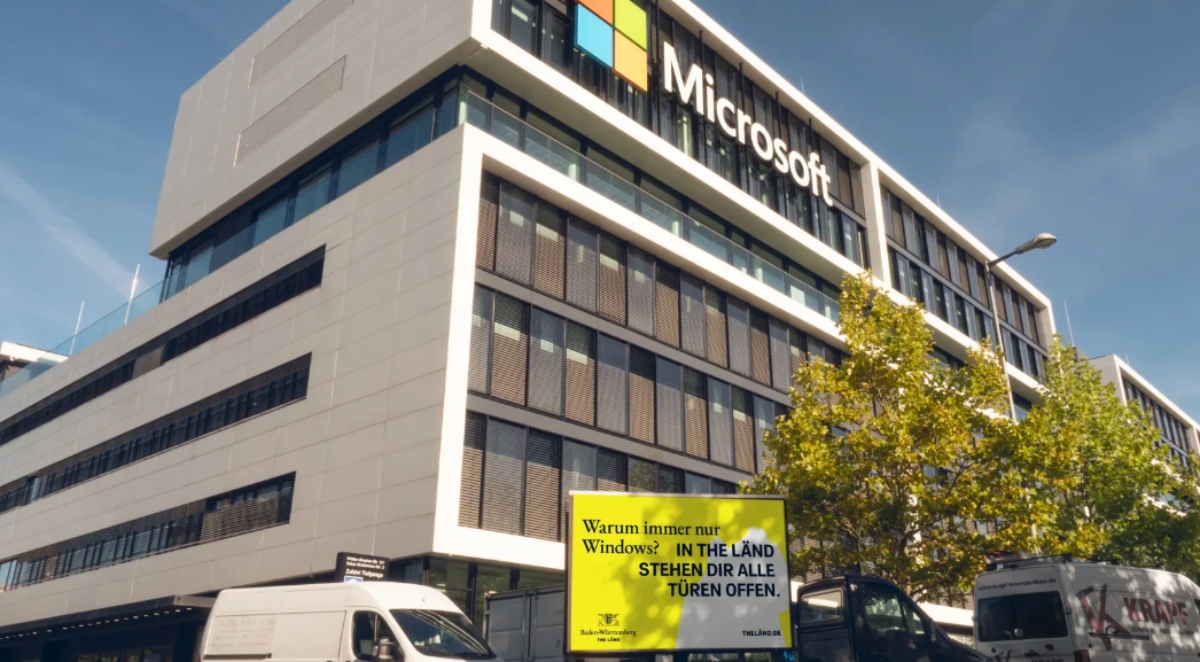 A poster has a certain number of contacts at a certain price. Or? Not if you do it like the state of Baden-Württemberg does. After the landslide introduction of the new claim “THE LÄND” last year, the state and Jung von Matt are now starting the first recruiting activities of the campaign with the aim of bringing international specialists closer to Baden-Württemberg – initially simply directly with US companies in Germany.

After a much-discussed introduction last year, the claim “THE LÄND” has arrived in the schoolyards, at the regulars’ tables and on Wikipedia. The Jung von Matt agency is now igniting the next stage in the search for skilled workers for Baden-Württemberg. With lines like “Why only Windows? All doors are open to you in THE LÄND.” in front of the Microsoft headquarters in Munich or the motif “Don’t let yourself be fooled” at the Apple Germany location in Munich, the federal state makes the employees of international companies in Germany THE with a wink LÄND attentive – and not only there.

What’s special: On the one hand, the posters don’t just stand around somewhere, they move. And not just in front of the company headquarters, but above all in the commuter traffic around – always exactly where people have time to read them: in traffic jams. To do this, the routes were compared with the traffic data in real time and optimized for traffic jams. And so the contacts per poster are multiplied.

The embassies do the rest to ensure smiles and talkability. At Tesla in Brandenburg they say: “Fuck it what the boss tweets.”. Bike posters appear at IQOS with the headline “Better to let your head smoke”. And on Google in Hamburg it says: “Waste your whole life with searches? Just Google THE LÄND.”

The strategy of appearing at five locations in three major cities simultaneously with contextual messages during the period from October 5th to 6th strengthens the perception of the campaign as a nationally rolled-out campaign – even though there are only five posters.

There is also the use of social media. Here, the headlines and motifs for the content, in line with the current “trucking” trend from the online gaming scene, were organically distributed and placed as banners at the locations using GPS and context targeting. Storytelling is then combined with funnel expertise with videos of the reactions and making-of clips. And so provided for more shares and comments. “Of course, this is not only aimed at the employees of the companies mentioned. Through contextual placement, we ensure discussion and dissemination. THE LÄND as a place of longing to work and live – where you can put such sayings on a poster.” adds Andreas Brunsch, Managing Director at JvM NECKAR.

The next flight of the umbrella brand campaign will start in the UK and India in autumn. Then really on international terrain. Further measures are planned for this year. So you can be curious.

Value-Based Innovation: How Brands Can Thrive in Times of Inflation

Pharma Marketing in a Hybrid World

Following incredibly positive news from the latest Expenditure Report from the Advertising Association and WARC, New Digital Age has been asking the industry for its reaction.