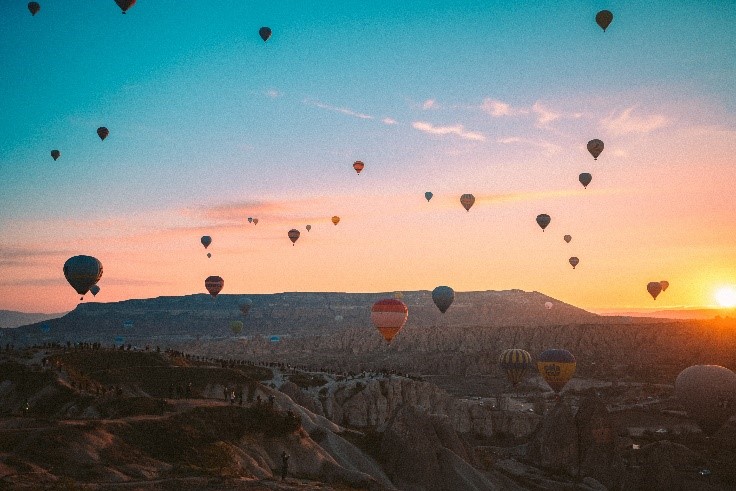 The “Land of Beautiful Horses” and Fairy Chimneys

A moonscape region carved by the nature and men, Cappadocia is most famous for its unique geological features and layers of history.

Cappadocia is the name of the region created by the erosion of the soft layers formed by the lava and ashes sprayed by the volcanic mountains of Erciyes, Hasandağ and Güllüdağ, and shaped by rain, wind, and ice for millions of years.

As the landscape was eroded, basalt stones remained and formed conical structures with some reaching as high as 45 m were created over time by erosion of the relatively soft volcanic ash around them. Past cultures have dug into them to create dwellings, castles, and even entire underground cities, used as hiding places by early inhabitants.

The local people referred to these unique rock formations as “fairy chimneys”, a name that has endured throughout the ages. If nature was the first artist to arrange the decor, it was Anatolian humankind who carved the rock and created Cappadocia as an open-air museum full of unparalleled natural and cultural phenomena.

Cappadocia, “the land of beautiful horses” as one interpretation of the name Katpatuka suggests, is the key to the myriad potential possibilities for exploring and experiencing this fantastic land, from riding to cycling, from exploration to sumptuous cuisine. No matter the season or time of year, this fantasy land has something to stimulate, captivate and invigorate the senses.

Cappadocia is one of those places, allowing you to leave our planet behind without leaving it. Given a chance, these lands will not quit on you.

“What I miss from before. And what I really don’t”

Angel Soul’s. Game streamers decided to save lives instead of taking them away while playing online